Teams of students from UTC Norfolk have taken part in a hackathon with insurance company Aviva, the latest in a series of employer challenges in which UTCN students are tasked with finding solutions to real business problems.

The one-day hackathon had a tech focus and saw the students challenged to come up with ways in which the business could better integrate its website and app with social media.

At the end of an intensive day of creative problem solving, the students presented their ideas to representatives from Aviva.  The pitches were supported by visuals, wireframes, flow diagrams and even some coding to demonstrate the teams’ solutions.

Following initial presentations by each of the teams to the Aviva staff who set the challenge and helped support the hackathon, the top three groups were given one last chance to impress and make a final pitch at the end of the day.

All three of the final pitches were of a high quality in terms of both the solutions the groups had come up with and the professionalism of their presentations.  After careful deliberation by the judges, the winners of the challenge were announced as the ‘Murphy’s Law’ team of Joshua Davis, Alex Rukaber, Oliver Grantham and Nick Knopp.

The winning group’s idea centred around the application of voice-controlled technology to the processes of finding out about and applying for insurance.  Year 12 student Alex Rukaber explains:

“Our idea was using Amazon Alexa to connect to the Aviva website to send links to forms, filling out insurance, recalling information from your profile and any policies you’ve taken out.  At the moment it’s not that much of a relevant technology, but we were thinking about future-proofing, so what’s Aviva going to need in the future to secure the next generation of people who need to take out insurance?”

“They didn’t just take the brief in terms of what does social media look like today, they looked at it in terms of what social media will look like tomorrow.  With the whole idea of the voice activation of Alexa, envisaging what that technology is going to do to drive more social interaction in the future.  The other step that they took is that they looked at how to engineer and write code, which I got to play with, and they gave a strong pitch.”

The Aviva team were impressed by the work of all the UTCN students throughout the hackathon.  Ness added:

“It was an opportunity for the students to look at a real-life problem and how it can be solved through a hack – a condensed set of time to come up with an idea, to develop the idea, and then pitch it.  They’ve done absolutely brilliantly.  They’ve blown our minds away in terms of some of the ideas that they’ve come up with and equally how they’ve then worked to get to the outcomes and how they presented.”

Year 12 student Joshua Davis said, “I’m proud of what we’ve achieved.  Today I’ve learned to be able to use the Amazon developer tools.  That’s something I didn’t have an interest in before but now I understand a bit and it’s grabbed my interest.” 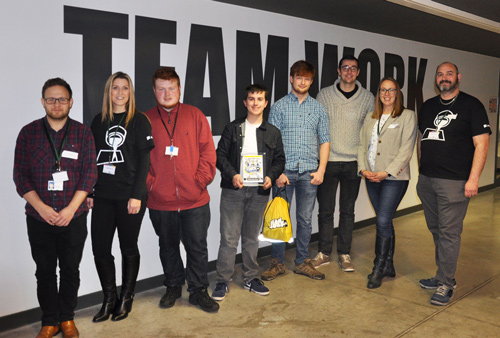