Young engineers from UTCN are preparing for a unique challenge set by the Royal Navy: design a machine to destroy anything lurking beneath the sea which might threaten Britain’s newest aircraft carrier.

The UTCN students are up against more than 80 teams from schools and colleges across the country, all converging on HMS Sultan near Portsmouth on Wednesday March 21 for the Royal Navy Engineering Challenge.

This year’s challenge – dubbed ‘Clean Sweep’ – requires students to design and build a remotely-controlled model vessel that can clear hazards from the path of the aircraft carrier HMS Prince of Wales.

A key part of the Navy’s commitment to the Year of Engineering 2018, the competition takes place directly after British Science Week and continues the theme of clearing the ocean of hazardous materials.

Competitors will also have the opportunity to sample naval life aboard destroyer HMS Bristol in Portsmouth harbour and to meet local and national employers at the event.

Held in partnership with HMS Prince of Wales, BAE Systems and Babcock, the challenge encourages young people to consider a career in science, technology, engineering or mathematics (STEM).

UTCN is entering two teams made up from students from Year 12 who have designed and built their entries. The students, who have named their boats ‘Rising from the Ashes’ and ‘Synchronised Sinking’ are:

“We all talked through our ideas and the final concept is something we all believe in. When the Royal Navy visitors saw our design, they told us it was the most innovative they have seen. All the other designs are based on a crane concept, however ours is based on a lift using gravity to pick up items on to a conveyor belt.”

“I have really enjoyed the project, particularly the circuitry. As a team, we have put in lots of extracurricular hours and I am really excited to see all the component parts come together to see if it works as effectively as we hope.”

“The challenge aims to encourage young people to continue their studies in STEM subjects by giving them a real-world problem to solve.  The students taking part in the challenge who continue into STEM careers have a bright future with UK employers, including the Royal Navy, as future talented scientists, engineers and mathematicians comfortable with new technologies.” 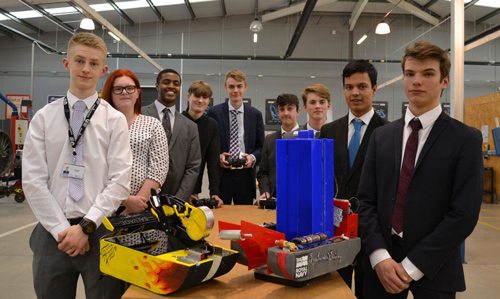