Thirty aspiring engineers from University Technical College Norfolk (UTCN) were taken behind the scenes at RAF Marham to learn about current operations, future developments - including preparations for the F-35 Lightning stealth fighter - and opportunities for school leavers with STEM (Science, Technology, Engineering and Maths) qualifications.

Home to 8 per cent of the entire Royal Air Force, RAF Marham is one of the largest employers in Norfolk.  RAF Marham has the frontline squadrons of the RAF’s Tornado Force, ready for operations across the globe.

The students were given a windshield tour covering 6.5 miles of the base. The students spoke with an RAF Tornado Engineer and had a guided tour of the aircraft.

The visit, hosted by RAF Marham’s Station Engagement Officer, Warrant Officer M Howard, continues the base’s ongoing association with, and support for, UTCN’s students – around 50% of whom go on to Apprenticeships after leaving UTCN at the end of Year 13.

“I enjoyed seeing how engineering is being applied and how engineering Apprentices have achieved so much and specialised in so many areas. We got to see and touch some of the equipment and armoury that is used, and had engineering designs and concepts explained for complex systems. As a student from one of only two colleges that have received this behind the scenes tour, I feel very privileged and grateful for the opportunity.”

“Our thanks to Warrant Officer Howard and his colleagues at RAF Marham for giving our students this fantastic insight into the wide range of engineering roles and opportunities available at a major air base.  The visit was thoroughly enjoyed by all of our students.” 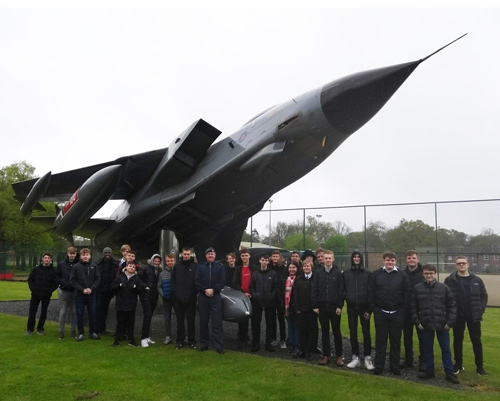