On Thursday, February 19 Chinese New Year took place. Before the half term break the Chinese Culture group helped their fellow students celebrate, whilst learning more about the festival and raising money.

At the beginning of the week, students sold Chinese chicken pancakes and played games on the Chinese Zodiac Animal Wheel. All profits from the day went towards the charity Break, who UTCN is also supporting through its Go Go Dragon project.

Students decorated the forum with Chinese posters and couplets and both staff and fellow students were able to sample Chinese noodles, tea and sweets. A large box of fortune cookies appeared and were handed out with best wishes for the forthcoming year.

Later in the week the sound of banging drums and cymbals could be heard across UTCN as the students learnt about the parades and celebrations that take place every year in China and in Chinese communities across the globe. In assembly, students learnt how to wish each other ‘Happy New Year’ in Mandarin and how the dancing dragons and lions were believed to scare away the evil spirits.

Thank you to everyone involved in bringing Chinese New Year to UTCN! 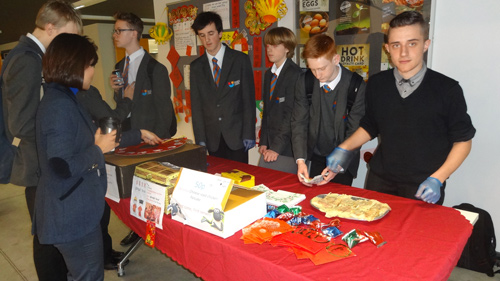