UTC Norfolk has been presented with an ex-Fokker 70 Rolls Royce Tay620 aircraft engine by KLM UK Engineering and KLM Cityhopper, who have provided the engine to be displayed to students and visitors during 2016.

The engine will remain on display during the year – including at UTC Norfolk’s Open Day on Saturday 6th February 2016 (10am-1pm) – to promote aviation and inspire students to think about careers in the aviation industry.

The rebuilt engine flew 26 years of revenue service at different airlines, and since 1996 operated for KLM Cityhopper (formerly Air-UK / KLM-UK).

The 2.4m-long engine, which has a dry weight of 3,310 lb (1,501 Kg), was received in a disassembled status from KLM Cityhopper and rebuilt by hand at KLMUKE by two engineering technicians over the last couple of months.

The next host for the engine after UTC Norfolk will be the International Aviation Academy in Norwich, which will receive the engine early 2017 when the new facility is opened.

UTC Norfolk principal Alex Hayes said: “We are thrilled to receive this engine on loan from KLM UK Engineering and KLM Cityhopper.  I am sure that it will inspire many young people to find out more about the fascinating world of aviation engineering. Indeed, I hope that many of our students will follow in the engine’s path as it makes the journey, next year, to its permanent home at the new Aviation Academy.”

Arjan Meijer, Managing Director, KLM UK Engineering, added: “Our Company is strongly dedicated to promoting aviation careers within the region, not only because working in aviation is motivating, challenging and fun, but also because we strongly need local skills and knowledge from the region to support our company in the future. This Rolls Royce engine will bring students at University Technical College Norfolk as close as possible to some of the prime technology behind flying aircraft and will help them take the right decisions for their future careers.” 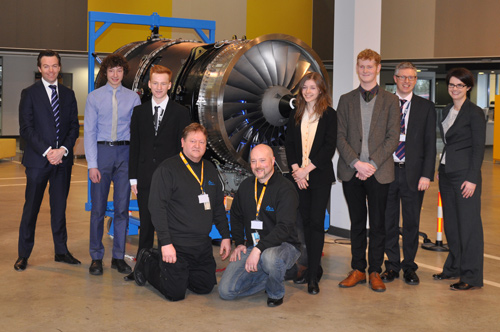