Latest News.
News & Events “I Wanted My Son To Go To University, But I’m So Happy He’s Chosen An Apprenticeship” .

Samantha was “dubious” about the value of apprenticeships when they first started to be discussed at her son’s school. Now she believes it is the best decision he could have made for his future. So, what changed her mind?

A big decision at 14

Corben showed a strong interest in engineering and looked set to follow in the footsteps of other engineers in his family. This led to Corben and his parents looking at transferring to a specialist engineering school (UTCN in Norwich) at the end of Year 9.

“It was a big decision to transfer out of his school”, says Samantha, “because Corben was doing really well at school. He was part of the very first cohort of students at UTCN, so there was no track record to go on.”

This bold move has paid off. Samantha says UTCN is “strong” in its engineering specialism and the school was “brilliant” with Corben, and “so supportive”, at a key point when some flexibility was needed.

I thought apprenticeships meant beauticians on £2 an hour

Like most people, Samantha admits to having a preconception about what types of apprenticeships are available. But a meeting at UTCN about STEM (science, technology, engineering and maths) apprenticeships changed all that.

“It’s not just £2 per hour beauty apprenticeships. There are highly competitive apprenticeships with lots of people going for them, with great opportunities. They are not easy to get on to.”

At the same time as applying for engineering degree courses, Corben applied for two engineering apprenticeships. He was offered both places and accepted an apprenticeship with British Sugar. It is easy to see why it appealed.

Over the next 4 years, British Sugar will be making a substantial investment in Corben’s training through its respected apprenticeship programme.

Corben will spend the first 18 months advancing his engineering skills through a college-based programme – with all of his accommodation and living expenses paid for by the company. He will then start working on the shop floor at one of British Sugar’s plants, whilst his learning takes him towards an internationally-recognised engineering qualification. Provided he successfully completes the apprenticeship, there is a guaranteed job for Corben at the end of it.

Money in the bank rather than student debt

Not bad. Especially when compared with the figure for average student debt from going to university, which now stands at £50,800.

“As a parent it’s a win-win. I didn’t want to Corben to be saddled with a huge amount of university debt and we’re not having to subsidize him to get him through the next 4 years.”

Samatha says that the final choice was down to what Corben wanted. A university engineering degree still held a lot of appeal. But Corben and his parents are more than happy with his choice to opt for the apprenticeship.

“This is an amazing opportunity for Corben, with a guaranteed job at the end of it. As his mum, I am so pleased he chose this.” 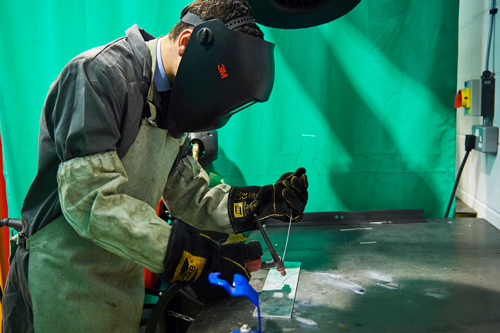