The principal of University Technical College Norfolk, Alex Hayes, says that a doubling in the number of young women choosing its unique Science, Technology, Engineering and Maths (STEM) focused curriculum is “fantastic news” for the UTC, for students, and engineering employers.

UTC Norfolk, which opened in September 2014, has seen the number of girls attending the school double from 24 (8pc) in 2015/16 to 47 (16pc) for the current academic year.  Mr Hayes said he was “absolutely delighted” with the figures, the second consecutive year of growth in girls at UTC Norfolk, which is based at Old Hall Road in Norwich.

With 1 in 6 UTC Norfolk students now being female, Mr Hayes believes that the increase can be attributed to positive efforts to encourage more girls to consider careers in science and engineering.

He says that this is aided by changing understandings of the opportunities that are available in the sector, which is helping to challenge outdated stereotypes:

“More and more girls are realising not only that there are many fantastic opportunities in the fields of engineering, technology, computing and science, but that these are fully open and accessible to them.

“This is bound up with improved understandings of what it means to go into a career in engineering in 2017.  It’s not about hulking massive pieces of oily machinery around in heavy industrial settings.  So many of the engineering opportunities that exist today involve using advanced technology, such as computer-aided design, remote control systems, robotics, precision engineering, nanotechnology.”

As part of its commitment to equality across all strands of diversity, UTC Norfolk has organised events designed to raise awareness of the opportunities available to its female students and to provide role models of women in engineering.

Mr Hayes says that attracting more young women to study STEM subjects is good for the science and engineering sector as a whole:

“There is a skills shortage with employers crying out for school-leavers, apprentices and graduates with STEM qualifications and engineering skills, not just locally but nationally and internationally.  We can go a long way to plugging that gap if we succeed in persuading more girls to become the engineers and scientists of tomorrow.  There is also a persuasive argument that a more diverse workforce brings in new skills and talent, new approaches to problem solving, which is crucial in engineering.”

Year 11 student Hajar has begun to think much more seriously about a career in engineering since starting at UTC Norfolk this September.  Hajar, who has aspirations to go into civil engineering or architecture, said: “I am attracted to technical design.  We need civil engineers and I want to do something that we can’t live without, I want to make a difference.”  Hajar added, “Not many females do engineering, but it’s always good to be the person that starts something.”

Contessha is in Year 11 and is considering a future career as a mechanic or as an engineering teacher.  Contessha has been encouraged by seeing women in engineering roles and believes firmly that the opportunities in the sector are just as much for girls as for boys, saying: “We’ve got to show the men that we’re not just going to stand on the side-lines and learn cooking and arts – we’re a lot more than that.”

Chloe, in Year 13, has begun the rigorous recruitment and selection process for an Apprenticeship in Weapons Engineering with the Royal Navy.  Ever since doing her GCSE in Resistant Materials, Chloe has been attracted to a practical career pathway where she can use her hands as well as her brain.  She has really enjoyed getting her hands on the £1.3M-worth of specialist equipment at UTC Norfolk.  Chloe said, “I think it’s good that we’re getting more women into STEM careers, because we can offer different things to men.  We visited Jaguar Landover as part of the 4×4 Challenge and it was inspiring to see the diversity of everyone there, with women doing the same things as men.” 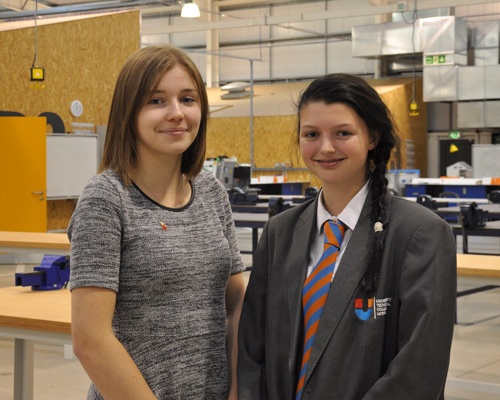